News that occur... Things one discovers... Like the limits of an almost $3000 camera. Take a peek at the two shots below... 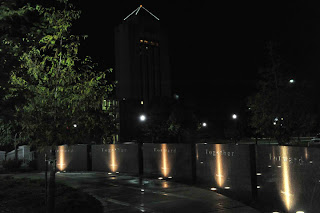 This one above was taken at night, at ISO 6400. It's the Cole Hall Memorial, to commemorate the five NIU students shot in February 14, 2008. The one below, however, shows an artifact in the middle of the building; that's what happens when you push the limits of the sensor. If you can, look at the building in the middle: there is a faint line there, slightly below the row of lit windows. What is it? "Normal" reaction to high contrasts at high ISO. Go figure. At least, the camera isn't in need of repair.
Now... the good stuff. 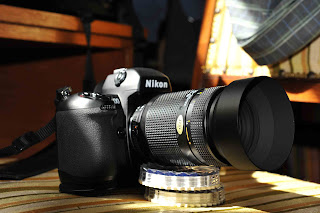 There's a new toy in town, a Nikon AF 70-210 f4-5.6. It's a non-D lens, and you can see it here, attached to my F100. As far a lenses is concerned, it's small, compact and practical. In fact, I think it's sharp enough to do the job of bringing stuff closer. However, it is noisy and the AF isn't as fast as if it were an f2.8. One might wonder what's the use of getting a lens like this... and, to be quite honest, the price was sooooo reasonable it would have been foolish to pass. 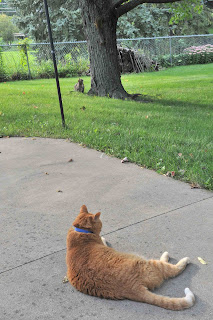 Now, the day I was out "testing" my new toy (and I do have some photos with it, but will post them later), I saw this stand-off in the yard: Mimi chased a squirrel and forced it to go up the tree. And Ben? He was just supervising her.
Now... the last and best: Rigoberta Menchú, Nobel Peace Price 1992, came to campus in Sept 23, 2009. My wife and I were both invited to a small reception and, since we couldn't find a baby sitter, my wife, wisely, resolved to take our son Edmund with. Here he is, meeting a Nobel Prize at his ripe 4 months of age. 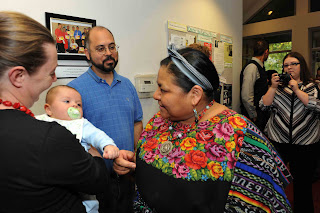 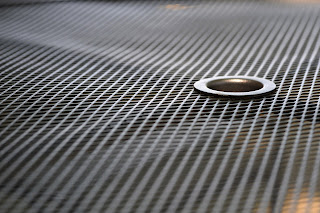 The point, or my goal, is to isolate them, detach them from what they "belong" and turn them loose into the world of meanings. What do they mean or suggest? Hmmm... 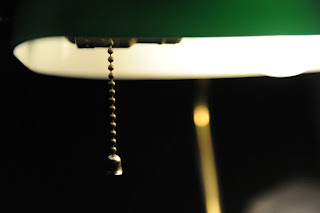 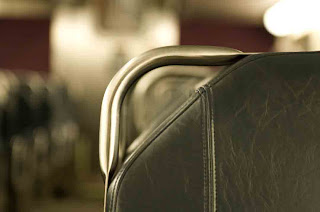 So many parts, sections and details. So many functions and uses, and yet, so human all of them, as they are vaguely connected to the part of our body we operate them with. Otherwise, how to explain the thin metallic cord of the lamp above, or the firm handle of the train seat. Heck, how do we explain the whole in the center of the table all the way above, without our getting used to this furniture?
BTW, two of these items are in DeKalb. You can guess which.
'til the next one!
Posted by Francisco Solares-Larrave at 5:00 PM No comments:

That's how some people call their backyard, because, if it's like mine, it offers a lot of possibilities for a decent shot with a macro lens.
Now, let's cut to the chase. These are macros, done with my Nikon D700, and while all of them are, say, reasonably decent, there's a postprocessing aspect that stumps me. However, let's begin by the beginning. 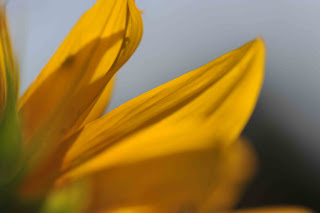 My macro lens is a Sigma AF 105 f2.8, purchased in the summer of 2005. It's seen a lot of work ever since. And, in fact, it's perpetually equipped with an 812 Tiffen filter. Will that explain the wonderful tonality of these photographs?

That thing above is the lonely, single petal of a sunflower. The plants in our yard are about 8 feet tall... and that makes the flowers a bit difficult to photograph. The one above is a rare case of low bloom, and instead of doing the boring and overused top, frontal shot, I chose a less boring and overused petal contrasting with the sky. They have an abstract quality about them that makes them perfect for cards. 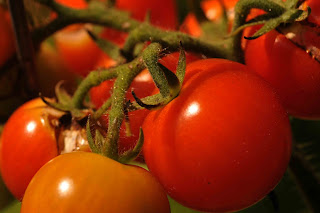 Summer wouldn't be complete without tomatoes. We have a happy crop here... and we better hurry to pick these ones (photographed with the above mentioned Sigma lens at f9) The odd thing I've learned with macro is that a smaller aperture rarely means a large DOF. Somehow, I figured out that long lenses do not really cast a sharp focus zone the same way wide angles do, and also that DOF operates in a much more generous way the further the subject is placed. Hence, despite the small aperture, there's some fuzziness about the second and third tomatoes.

But they do taste great... 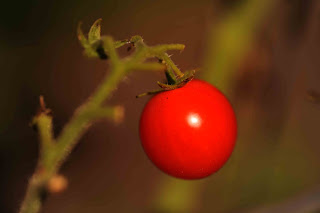 Now, this lonely guy represents a problem. Take a peek at it, click on the image and you'll see an obscene amount of posterization on the right side of the shot, right where I want the bokeh to show its beauty.

How does this happen? I have no clue...

Usually, after downloading images, I work a little on levels and exposure, then use the Photoshop Elements function "Save for web." This one has the very unexpected effect of enlarging the dimensions of the file (if originally it is, say, 5 inches, after this function it will be 15 inches long). The way I change that, so as not to post outrageously large files on galleries, is that I open the file's dimensions, and reduce the largest one by at least two thirds (we're talking inches, here, not pixels). I thought I had it down pat... until today, when this little bugger baffled me.

What to do? I will appreciate suggestions. Thanks in advance!