Zooming out with a slow flash

Some days ago I tried this technique with some unsuspecting subjects at home... Gear: Nikon D700, AF-S 24-70 f2.8 lens, and a Nikon SB-600 flash set to bounce light from the ceiling.

Basically, it just takes setting the flash at Slow, and the ISO at 400 OR 640 (anything below 800, but then it also depends on the environmental light). With the camera in P exposure mode, I simply turn the zoom ring while the shutter curtains are open (which can be about 1 second). Here are the effects... 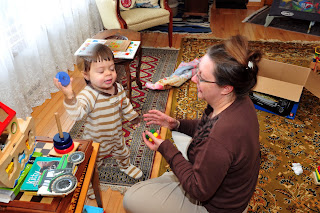 Edmund, the ghostly kid, prances about while I photograph him with a slow flash while zooming out a little. The effect is weird... 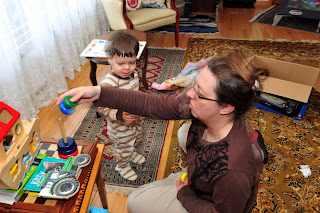 Here we go again... his head is blurred in the edges, as if he were a child in a Fringe episode. 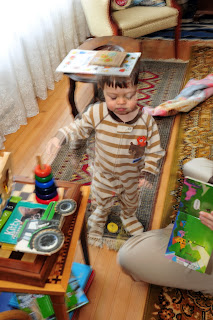 This is the best of them; his head seems to blend with the book behind. He must have moved at the same time I shot, and if we add the slow zoom out, the effect is quite scary. 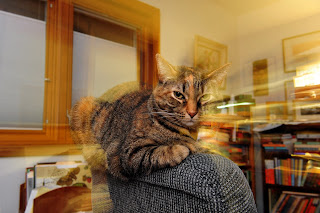 Why did I get into this? Because one evening, Mimi was keeping me company and it occurred to me that it would be a good moment to use her as an experimental subject. Which I did...

Unlike other warnings we find elsewhere... go ahead, try this at home. In fact, I'd like to do this at a wedding, just for the heck of it.

Of course, my other photos of Mimi on top of the chair may come up here later... just to show what happens when you point the flash head to the ceiling, or to the wall behind you.

More results of the DX-ing crop

Here we have some unexpected guests, who came to sample the berries of our trees in the middle of the big February 2011 blizzard. The first two shots were done by "cropping" the image with the DX-sized sensor, with an AF 80-200 f2.8 zoom lens (this time, at f4.5 or f5.6). As a result, we have the viewing field of a 300mm lens at the long end of the zoom. Neat... 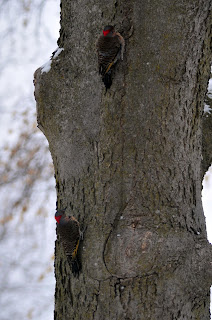 February 1st, 2011. In the middle of a brutal blizzard, these two guys (a couple maybe, but they have both the same plumage) parked on one of the trees close to the house. One of them was dangerously perched on the branches, picking out berries. The other remained on the trunk, fluffing his feathers and trying to get something out of the bark. 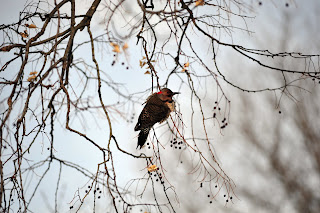 February 2, 2011. They're back! They survived! Here's one of them, hanging out on a branch, apparently after cleaning it from berries. 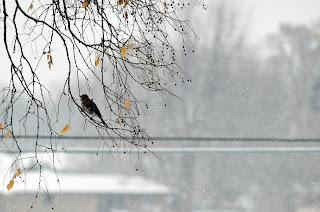 So, those were the news. Later on... more news!

Posted by Francisco Solares-Larrave at 12:09 PM No comments:

In a pinch for a long lens? Just DX it!

There are moments when you are close, but not enough. And whenever your long lens ain't long enough... Just DX it!

Here's the proof. Possum in my garden, on a snowy December day, with my AF 80-200 f2.8 lens wide open and at the longer end. Any details? Any revealing shot of the antics of Illinois wildlife? Worth the cover of National Geographic? 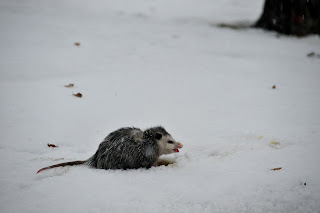 But then, what do you think of this one below? One can see the hair detail, heck, you can smell the fellow's breath!

Same lens, same focal length, just a few seconds (and some shots) after the one on the top. 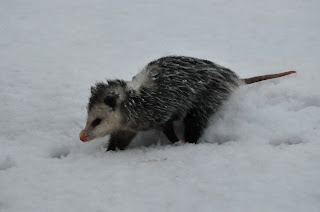 Miracle trick? Easy, I "cropped" the sensor, changed the image area from FX to DX.

Now, this is not rocket science and I'm sure most Nikon D700 users figured it out... but I just wanted to post the photographs of my friend the possum, and this was a good excuse. 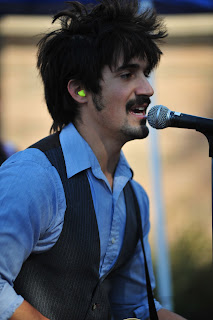 Care for an indie rocker from Rockford IL? By the way, I didn't DX this one. I was simply very close.

Posted by Francisco Solares-Larrave at 10:40 PM No comments:

One thing nobody has mentioned about the AF-S 24-70 f2.8 lens is its amazing minimum focusing distance. It's remarkable! How did I find out? On Saturday, Jan 15th 2011 we went to Chicago, meaning to take the heir to Shedd Acquarium. However, fate intervened, and we ended up going to a much less frustrating place: the Garfield Park Conservatory. There are lots of exotic plants there! 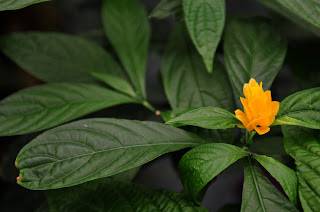 This yellow wonder was in the children's play area, where, as you can imagine, we spent some time while my wife made sure the heir got entertained. 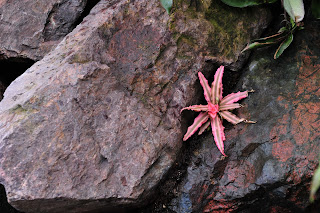 Right by the water exhibit, a nice illustration of composition, color and contrast. Forgot to pay attention to the name... though, to be quite honest, I didn't see any. 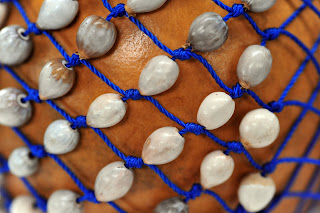 I must admit this is not a plant, but a toy. It was a type of maracca made out of something like a gourd, and covered with a nice lacing of thread and pebbles.

All the photographs with the exception of the last one, were taken with the AF-S 24-70 f2.8. True, they don't show how close this lens can get, but then, see this one. 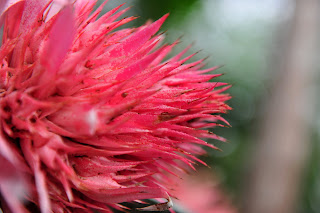 If I remember correctly, this is from the Bromeliae family... And if it's not, well, it wasn't too far from the Bromeliae. In any event, I got very close to the focusing point, and may in fact venture that I was at about four or six inches away.
Did Nikon design the lens to be this way? I remember it's a professional lens, but that also makes me wonder whether professional glass is expected to be this versatile. Imagine... this is fast glass, nicely sharp, and can do macro in a pinch!

Not that it's a magic bullet. Remember: it can flare.

But, for whatever it's worth, that was a nice discovery.

Posted by Francisco Solares-Larrave at 7:49 PM No comments:

Can one replace the Nikon D700?

Short answer: no. However, see below... 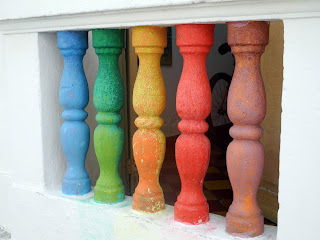 While in Cartagena, since I didn't want to slug about all the baby stuff AND a heavy digital camera (whose rubber covers are beginning to act like coming off), I purchased a Nikon Coolpix P7000, led by the good reviews and gushing comments heard all over the place. 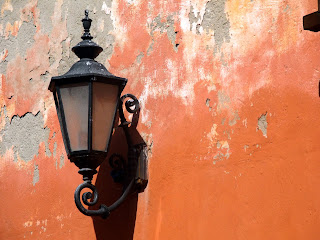 Somewhere on the way to the Plaza Bolívar, a street light looks wistful against a weathered wall.

Let's say it's not a bad camera... but it's no dSLR either. It's a very competent P&S with an ego, and a parallax problem that only disappears when you're shooting at a considerable distance from your subject. I insisted on using the viewfinder... only to end up with a lot of unexpectedly cropped shots. As a result, I had to chimp. 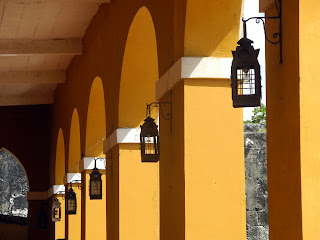 These arches support "The Bóvedas," [The Vaults], which were in the past used to billet troops and store ammunition and guns. Today, there are craft- and souvenir stores instead.

Chimping is absolutely uncool (which is to say, dumb), and nothing takes the fun of photographing faster and better than squinting and struggling to see a small screen in a place as sunny as Cartagena. Only for certain type of photographs could I act as if I had a real camera in my hands. 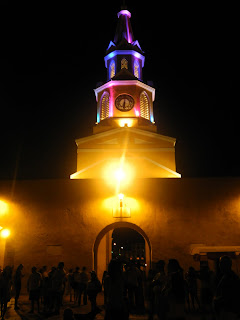 From what I heard, this plaza used to be the main marketplace for the sale of African slaves in the days the Spaniards ruled this part of the world. Nowadays, it's a pedestrian exit of the city (takes you to the Parque Independencia), and right behind the founder's statue one finds El portal de los dulces, a place in which candy sellers offer their (delicious) masterpieces.

Then, I should not be so thankless. Despite its quirks (sometimes it won't shoot because it cannot find a pattern to hold on and focus... and at times it simply doesn't feel like shooting), when it works, it does the trick. I read in some reviews that the high ISO photographs were terribly noisy, but the one above does not confirm it. Now, if you're shooting in A mode, and change the ISO from 400 to 3200, yes, there will be grain. The fix is to set the camera to Night Landscape mode (which has a slew of settings already preset) and voilà! Problem solved.

I initially was going to sell this little gizmo... but it kinda grows on you, especially after shooting a few sunsets, which I only managed after having figured out that one turn of the easy exposure compensation dial would prevent the camera from giving me what it thought was a blue sky (it took three stops of underexposure, without going into any menu! This digital camera has actual dials!!). I don't know if I'll use it the same way I use my Nikon D700, but at least I can say it came to save the day in Cartagena.

Just take another look at the images above... and below 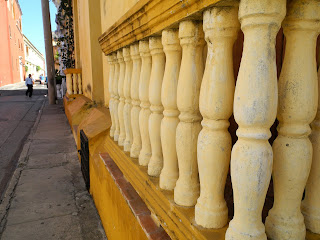 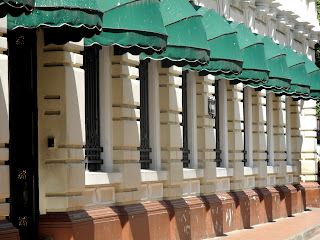 I believe this is a hotel, and its privileged location makes it a place by which I walked about a lot, right in front of Plaza Bolívar. 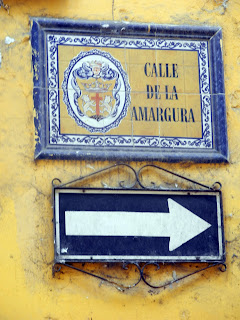 Finally, Bitterness Street, and the arrow that dooms you to go down it only ONE way... Fortunately, it's very short.

Thanks for bearing with me!

Posted by Francisco Solares-Larrave at 10:51 PM No comments:

From my (not so) old files


Since we started the new year, I decided to be prepared and create some folders in my computer for future downloads... and then, found these unposted, unexplored photographs. Here you go! 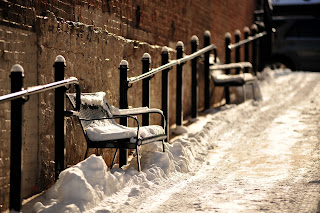 Here is to my adventures in DeKalb, in early December 2010. No people... nobody was crazy enough to go out on a beautiful afternoon like this one. Go figure... Hence, the empty bench above. 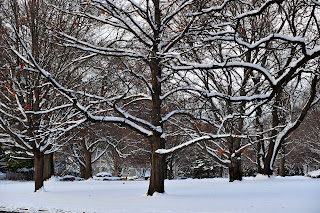 Trees with snow-heavy branches down Linden Drive, in DeKalb, IL. 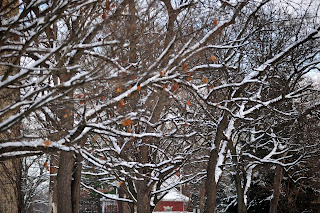 Other group of trees, which make the neighborhood look like a fantasy winter wonderland. 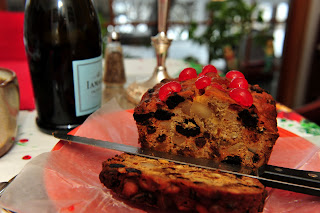 When it comes to the practical side of the holiday, this was the fare for Christmas Eve: prime rib, healthy veggies rendered unhealthy with smothering amounts of cheese, Italian prosecco and a star of stars, my light fruitcake (loaded with nuts). 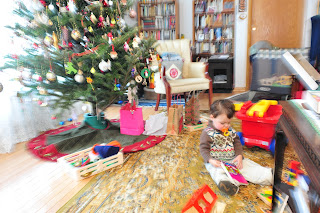 Needless to say, Christmas morning was another story this time. And I decided to play with the zoom just for the heck of it. See the results above and post your opinion.

Posted by Francisco Solares-Larrave at 11:08 AM No comments:

Here is an image to give you an idea of what the holidays were for me. 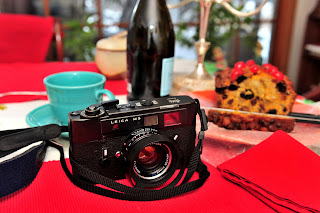 In truth, I spent all the time baking that fruitcake in the background, playing with my newest acquisition (the Leica M5 with Nokton 35mm f1.4 visible in the foreground), and writing a paper for a conference I attended in Cartagena de Indias, Colombia.

I also purchased a Nikon Coopix P7000 for the trip to Colombia. Later I may upload some of the photographs I took there, but let me add something: I missed my D700 every step of the way, whenever I was not using my Leica.

But then, such is life: one has to learn to make do. In the meanwhile... Let me reiterate my wishes for a good, plentiful and well exposed 2011!

Posted by Francisco Solares-Larrave at 6:59 PM No comments:

Was this a gift?: No

I purchased this card from Adorama and I am quite satisfied with it. What else is there to say? It does what it is supposed to do, and well. Best aspect of it? Price.

Posted by Francisco Solares-Larrave at 8:09 PM No comments: